Development of an interactive museum in VR

At the end of 2019, the International Data Corporation (IDC) analyzed the situation in the mobile applications market and came to the conclusion that VR will grow rapidly over the next two years. The volume of the industry reached almost $ 10 billion by the end of 2020, and the growth curve is becoming steeper, that is, the pace of development will only increase in the coming years. This means one thing – now is the time to integrate VR technologies into various spheres of life, in particular into art.

The use of modern technologies in art is not welcomed by everyone, because it is believed that these are two non-intersecting universes, which does not make sense to mix. The experience of those who dared to step over the public misunderstanding proves the opposite. For example, a VR museum is an extremely promising direction that allows attracting the attention of the general public to art, from curious schoolchildren to elderly people who are open to everything new and unknown.

Interactive exhibitions and virtual VR museums are good because they allow a person to get to know more about exhibits and antiques from anywhere in the world. In order not to fly to the United States for the sake of the Smithsonian Museum of American Art alone, you can use a special application. Similar services are offered by other major world museums – Hintze Hall, Louvre, British Museum, etc. Many people would love to immerse themselves in this age-old culture, but often do not have the physical ability to drop everything and go to another country to see an exhibition or gallery. This is what VR museums are good for – they provide an opportunity to touch the world’s cultural heritage from anywhere in the world.

The cost of developing an interactive museum

The cost of developing a museum in virtual reality is formed in a complex manner and is composed of four factors:

The process of creating an application includes 5 stages in addition to working with the framework and code:

The design of applications in VR is very different from traditional ones, here you need a deep understanding of the principles of building UI and UX, otherwise there is a possibility of creating something cumbersome and extremely inconvenient for an ordinary user. The price of an interactive museum also takes into account the need to hire experienced UX and UI designers to ensure a positive user experience.

VR technologies for museums and exhibitions

FlexReality web studio offers services for the development of applications using VR technologies for museums. Reconstruction of the detailed halls of the museum, where you can fully pick up and study the presented exhibits, learn their history of creation – this is what will allow the museum to become more attractive in the eyes of visitors.

The main advantage of virtual reality for museums and exhibitions is that it allows the guest to be transported to a new location, providing him with an unforgettable experience of independent exploration and study. By placing art in the same space, you can create the basis for literate historical storytelling, while maintaining the atmosphere of the original context. This, of course, will not replace a full-fledged live experience, but it is still an alternative for those who, for one reason or another, cannot travel to other countries on a regular basis.

The use of VR technologies for museums allows you to regularly change exhibitions, create interesting excursions and tours for everyone. Leave a request on the FlexReality website – we will call you back and discuss all the nuances associated with the development from the planning stage to release. All the best! 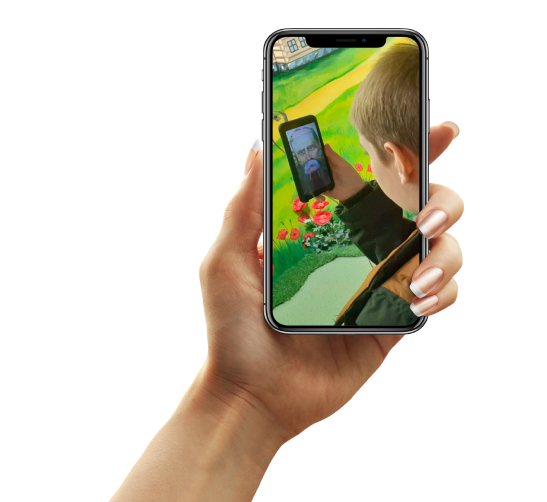 interactive museum in Brovary
Смотрите WEB Разработка
Frequently asked Questions
01 What is a virtual museum from?

A virtual museum is a complex concept that includes the museum itself, collections and exhibits. It is a website or application aimed at displaying museum materials, art objects, heirlooms, virtual collections. With the help of the virtual museum, you can conduct full-fledged tours and excursions.

02 What is a virtual museum?

This term refers to a website or application that supports AR and VR technologies. It serves to distribute information documents, catalog and display life-size works of art to users. A virtual tour of such a museum can include exploring animated 3D models, soundtrack, and a variety of multimedia elements to interact with.

03 What are the virtual museums?

With the help of virtual museums, their creators try to convey information about objects of art and exhibits to a wide range of people. Moreover, to visit such a virtual museum, it is not necessary to go somewhere – with the help of VR glasses, you can visit such tours and exhibitions right at home. Museums, national exhibitions, art galleries, libraries – with the help of modern technology, you can create almost any kind of tours to show interested works of art, tell their story of appearance and give the opportunity to carefully study three-dimensional models.

04 How much does it cost to develop a virtual museum?

The cost of creating a virtual tour or museum depends on the size of the project. The number of exhibits to be recreated in the virtual space, their dimensions, animation and soundtrack. The price is formed in a comprehensive manner and is discussed with the client at the stage of drawing up the technical specification. Taking photos, creating spherical panoramas, assembling a virtual tour, adapting to viewing in VR glasses, recording and adding sound – all this affects the final development cost.